The famous Somnath temple is located in Saurashtra that is on the western coast of Gujarat. This temple is known for ages for being one of the first twelve jyotirlinga shrines of Lord Shiva. People from different corners of the world come to this place to have a glimpse of this temple. It is an important place for pilgrimages. The temple has a beautiful view as it is built on the coast of the Arabian Sea. The sacred soil of Somnath temple is famous because it is the place from where Shri Krishna commenced his last journey to neejdham.

Where is Somnath temple? 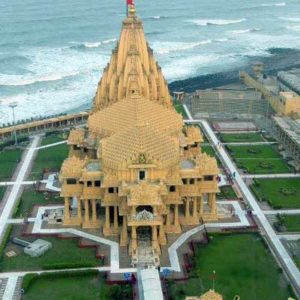 The temple is located in Saurashtra. It is found on the western coast of the Arabian Sea. It is a magnificent temple that has always drawn the attention of people for ages. The temple was built by Somraj. However, it was built by Ravana in silver, Krishna in wood, and Bhimdev built it in stones. It has a long history. The temple has a special significance for which it is admired by a lot of people. The place is peaceful and beautiful.

You must know that this temple was attacked several times. It was in 1025 AD when Mahmud Ghazi attacked and looted the temple. He was a Turkish emperor who attacked India several times from 1000 to 1027 AD. Every time he attacked the place and damaged it badly. The attack on Somnath temple was the biggest attack by him. He looted the temple and left it damaged. The main intention to attack the temple was to loot all the gold items. He succeeded in his attempt. The impact of his attack was bad. It left the total political system with no way.

History says that Somraj or the God of Moon built this temple in this beautiful place. The whole temple was made of gold during that time. The large black Shiva Linga that appears in the middle of the temple is one of the 12 shrines of Lord Shiva. When Mahmud Ghazi attacked the temple it was a wealthy one. During that time, it had 300 musicians, 500 dancing girls, and many barbers. In a two-day battle with Ghazi 70,000 defenders lost their lives. However, the temple was rebuilt several times by Ravana, Krishna, and Bhimdev.

If you are willing to come and explore this temple, you must be well aware of the timings. The temple opens at 6.00 am in the morning and closes at 10 pm. It is a long time and you can plan for a suitable time. If you wish, you can also have a special darshan of the temple. For this, you have to make prior bookings. It can be made both through online and offline mode. Most people come to visit the temple during morning hours.

It is believed by many that visiting this temple can bring good luck in your life. A temple is a great place for visitors who are religious-minded. If you have not yet come to this place, make a plan and pack your bags.